This study looks at the ability of both Microbial Freeze Drying Buffers, sucrose, and skim milk to protect Escherichia coli following lyophilization.

Escherichia coli DH5α was cultured overnight at 37°C with shaking.  Four 5 ml aliquots of the culture broth was centrifuged and the supernatant was discarded.  The bacterial pellets were resuspended in 5 ml of one of four solutions: 10% skim milk, 10% sucrose, Microbial Freeze Drying Buffer with tryptic soy broth, and Microbial Freeze Drying Buffer without tryptic soy broth.  All solutions were sterilized prior to use.

The bacterial solutions were then serially diluted in triplicate 1:10 in tryptic soy broth in a 96 well plate.  This serial dilution provides an easy method of determining the relative concentration of viable bacteria in the samples, being similar to the most probable number method.  The diluted bacterial plates were then incubated overnight at 37°C without agitation.

Concurrently, the bacteria in the lyoprotective solutions were aliquoted into 3 ml serum vials (250 µl/vial), capped with a split stopper/bung, and then freeze dried.  Freezing was for 2 hours at -40°C.  Primary drying was for 16 hours at -25°C, followed by secondary drying at 25°C for 3 hours.  Vials were sealed under vacuum and then further secured with a foil crimp seal.  These vials were stored at 4°C until evaluated.

In evaluating lyoprotective solutions for use in preserving microorganisms, it is important to evaluate the viability of the microorganism immediately after freeze drying and then over a period of time.  The four solutions used for preserving the E. coli were tested for the initial effects.  This data is summarized in Table 1.

Table 1.  Effect of Lyoprotectants on the Viability of E. coli before and after freeze drying.

The data in Table 1 shows that all four solutions do not have a significant negative effect on the viability of the E. coli before and immediately after freeze drying.  This initial evaluation is an important starting point for determining the effect of these solutions on the long-term viability of the bacteria.

A real-time evaluation of the freeze dried E. coli was then performed to determine whether the lyoprotectants have any significant effect on the viability of the bacteria.  A real-time study was performed as opposed to an accelerated shelf-life study as the latter study is not accurate as applied here. Once freeze dried, the bacteria must be stored at 4°C to remain viable. Holding the vials at 37°C, even for short periods, can rapidly kill off the microorganisms.  Previous work in our laboratory has shown that accelerated shelf-life studies of freeze dried bacteria do not correlate to long-term viability of samples stored at 4°C.  Consequently, the freeze dried organisms were evaluate at 3, 6, 12, and 30 months for remaining viability (and the study continues).  Figure 1 illustrates the viability of the bacteria. 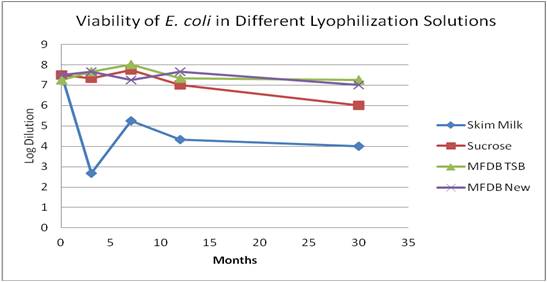 The effect of the lyoprotectants on E. coli viability are pronounced. Skim milk, which is a very popular matrix for freeze drying, leads to between a 3 and 4 log decrease in the viable bacteria within a year. (Note that the rogue data point for skim milk at 3 months doesn't detract from the overall trend.) Sucrose starts relatively well, but by 12 months, the viability of sucrose protected bacteria starts to decrease. The two versions of Microbial Freeze Drying Buffer yield the highest viability and are essentially the same in performance. It can be concluded that the omission of tryptic soy broth from the original formulation does not negatively impact the effectiveness of the Microbial Freeze Drying Buffer.

¹ Microbial Freeze Drying Buffer is only available in the new formulation which is free of animal products.