Guide to the Disruption of Biological Samples - 2012

Scientific literature reveals an interesting pattern in the way researchers have historically homogenized samples.  Foremost, scientists in their traditionally independent manner rely on no specific tool in any one field to disrupt samples.  The methods and procedures that are employed support the notion of innovative and independent thought upon which science is built.  However, there is a pattern that occurs frequently which is very effective, that being the use of two or more of the methods discussed above.  Most sample processing is done with two steps using different homogenizers.

Using two steps to homogenize samples is done out of practicality.  The first step in the process is used to reduce the size of the sample to coarse particles while the second step further reduces or obliterates those particles.  The second step of the process is less or unsuccessful without the initial processing step.  In order to compare single-step and two-step homogenization methods, equal sized samples of mouse muscle were homogenized with the methods sited above and with two-step combinations of those methods.  The lysates generated from those processes were then assayed for lactate dehydrogenase (P) which provided data on the relative efficiencies of the method (Fig. 20).

Other combinations also proved to be effective.  CryoGrinder™ in conjunction with the Dounce (Fig. 17), Potter-Elvehjem (Fig. 18), and conical glass homogenizers all generated homogenates better than those methods alone.  The rotor-stator and sonicator also were an effective combination (Fig 19).

Most single step processes are less than 50% effective as the most effective two-step combination.  The force of grinding balls with the high throughput homogenizers provides the best single-step results, and with that, the large vials and grinding balls suggest that greater force produces better disruption.  Sonication, interestingly, borders both sides of the effectiveness scale showing its ineffectiveness on solid samples but is highly efficient at finishing a two-step process.  Although many one-step processes are only partially effective as compared to alternatives, it is important to realize that if chemical lysing methods are used subsequently, the resulting homogenization may be completely adequate.  This is certainly the case for cryogenic grinding where tissues are effectively dissolved with detergents and chaotropes. 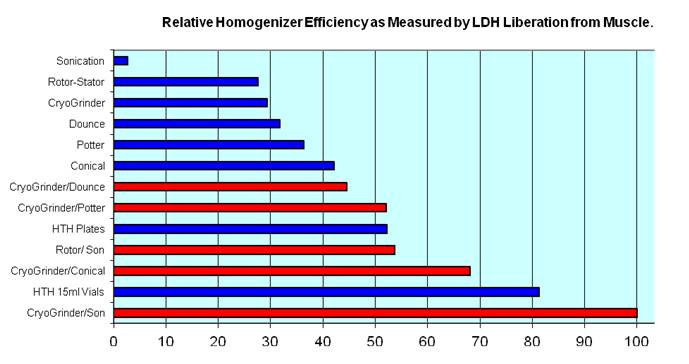 Figure 20. This relative efficiency chart is very revealing as regards the effectiveness of any single method on sample homogenization.  The blue bars represent a single processing step while red bars are two-step processes.