Research Note: In Pursuit of a Ready-To-Use, Shelf-Stable qPCR Mix

Easy and routine methods to produce shelf-stable qPCR mixtures have practical applications in field and point-of-care diagnostic testing. Freeze-drying is one technique used to formulate shelf-stable products. Using a commercially available freeze-drying additive (2X Lyophilization Reagent), qPCR mixes were prepared and freeze-dried in several formulations using readily available enzymes and reagents. The presence of glycerol and surfactants in the preparations shortened the shelf-life of the product. Using a glycerol-free Taq DNA polymerase and omitting the PCR buffer from the reactions, however, resulted in a stable formulation; PCR buffer was subsequently added during rehydration of the reaction. The freeze-dried product was slightly less sensitive than freshly made preparation, but the process and formulation can be optimized and used to produce complete, shelf-stable ready-to-use qPCR mixes.

Our goal is to develop and share a simple method for making shelf-stable qPCR mixtures using readily available components. In this case, shelf-stable suggests an assay component that is stored in a refrigerator and can be easily transported and used at ambient temperatures. A potential application for shelf-stable qPCR mixture would be the creation of ready-to-use, pre-filled qPCR tubes that would simply require the addition of isolated DNA prior to amplification. To attain this shelf-stable qPCR mix, the product would most realistically require lyophilization (a.k.a., freeze drying) of the reagents.

The development of complete, freeze-dried, ready-to-use PCR mixes is not new. Klaster et al. (1998) successfully tested two Taq polymerases (SuperTaq and AmpliTaq) in trehalose/collagen based mixes for basic PCR, though specifics of processing were not provided. A US Patent by Park and Kim (1999) also provides insight into freeze-drying a basic PCR using various excipients. An assay-specific PCR for detecting Mycobacterium ulcerans, the causative agent of Buruli ulcer, was developed using dry reagents that were combined just prior to testing (Siegmund et al., 2005; Siegmund et al., 2007). Only the primers for this PCR were lyophilized, yet the parameters for the process were absent. Babonneau et al. (2015) furthered the M. ulcerans assay with the development of a qPCR that contained all components, except the target DNA. This mixture was prepared in glass vials in bulk, but there were no details about the freeze-drying process. A lyophilized panel of qPCR mixes for the detection of 10 pathogens was successfully tested by Sokhna et al. (2013) for point-of-care testing in Senegal. Bulk samples of the mixes were prepared in France, though the specifics of the process are not provided. Kamau et al. (2014) used a ready-to-use multiplex qPCR in strips and plates for the detection of malaria. The mixtures were stable for up to five months at 37°C. The specifics of the preparation are proprietary, as processing was done by a commercial operation. McHugh et al. (2015) also used a commercial service to prepare a multiplex qPCR targeting Neisseria meningitidis and Streptococcus pneumoniae. Overall, freeze-drying has been successfully used to prepare both standard and qualitative PCR mixtures, though the specifics of the preparation process are limited.

Lyophilization is an effective process that can be used to prepare shelf-stable reagents. The process involves freezing an aqueous solution and then applying a vacuum that sublimes the water and leaves the remaining molecules in a dry and stable state. Most freeze-drying protocols rely upon the addition of excipients, which are additives that help to form a matrix (or cake) and/or stabilize the lyophilized molecules. Common excipients include mannitol, sucrose, and trehalose. OPS Diagnostics has uniquely developed 2X Lyophilization Reagent, a proprietary solution for freeze-drying biomolecules used by mixing the reagent in equal parts with the solution to be freeze-dried. We have used our 2X Lyophilization Reagent in our pursuit of a convenient method to develop shelf-stable qPCR mixtures using readily available components.

A 23S sequence from corn (Zea mays) chloroplast RNA-operon was used as the target for assessing the effectiveness of a shelf-stable qPCR mix. The PCR generated a 109 bp product that is detected using FAM fluorescent dye and the ZEN and Iowa Black FQ quenchers. Primer sequences and thermocycling conditions are summarized in Table 1. All reactions were performed on a Bio-Rad iQ5 thermocycler. The cycling conditions started with denaturation at 95°C for 3 minutes, followed by 40 cycles at 95°C for 10 seconds and annealing at 50.7°C for 30 seconds.

Table 1: Primers for the Zea mays 23S rRNA qPCR were obtained from Integrated DNA Technologies and resuspended in 500 µl of sterile water with a final concentration of 20X

The design concept for a shelf-stable product is a ready-to-use PCR tube that will contain all of the components necessary for the qPCR, except for molecular biology grade water necessary to rehydrate the mixture prior to adding the template DNA. Consequently, the components in the qPCR  cocktail and the lyoprotectants in 2X Lyophilization Reagent were tested for compatibility.

First, a baseline control reaction was tested in the presence of diluted 1X Lyophilization Reagent to eliminate the potential for enzyme inhibition or fluorescence quenching. To test the compatibility, 10 µl of 2X Lyophilization Reagent was dried in a PCR tube using a SpeedVac as the volume of the components was greater than 50% of the formulation (and would result in less than 1X Lyophilization Reagent). Bio-Rad Supermix (10 µl, iTaq™ Universal Probes Supermix, Bio-Rad) was added to the tube, followed by 1 µl probe/primer mix, 1 µl template DNA, and 8 µl water. A comparison amplification between reactions with reagent and without 1X Lyophilization Reagent shows that the positive reactions came out clustered, within two cycles, and overlapping (Fig. 1). 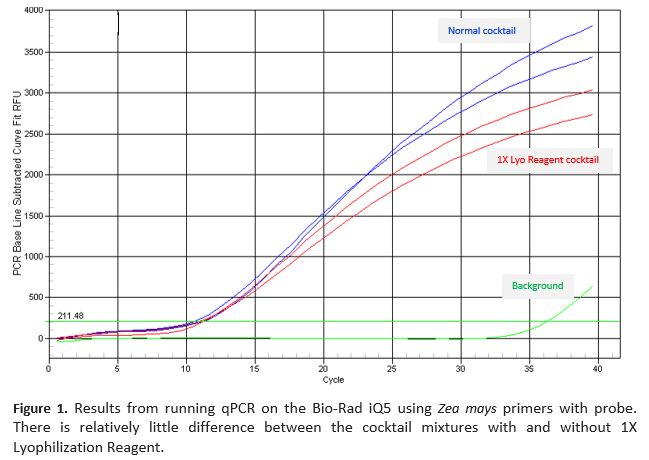 Figure 1. Results from running qPCR on the Bio-Rad iQ5 using Zea mays primers with probe. There is relatively little difference between the cocktail mixtures with and without 1X Lyophilization Reagent. (Click on image to enlarge)

As the diluted (1X) Lyophilization Reagent appeared to have no significant effect on the qPCR, a number of formulations were tested for freeze-drying the reactions (Table 2). The initial formulation tested used the Bio-Rad Supermix, which contains the Taq DNA polymerase, dNTPs, buffer, and many additives. Upon freeze-drying, it was observed that the cake within the tube appeared collapsed. Though the small volume of the reaction made visual assessment difficult, the cake was rehydrated and tested with template DNA, nonetheless. While the amplification from this formulation was initially good, DNA failed to amplify within one week. The probable cause of activity loss was the poor cake formation, which may be attributed to the Bio-Rad Supermix additives (surfactants and glycerol). These additives can easily cause the collapse of a matrix during freeze-drying.

A second formulation was prepared using standard Taq DNA polymerase and 10X buffer (Denville Scientific). The Denville buffer lacked the surfactants, though the enzyme did contain glycerol. We deduced the low concentration of glycerol would not cause issues with the matrix since the enzyme is used at 0.5 µl/100 µl reaction. Unfortunately, even at 0.25%, the cakes generated by this freeze-drying run also collapsed. Amplification using these reaction tubes was poor.

The final variation used glycerol-free Taq DNA polymerase (GoTaq® MDx DNA Polymerase, Glycerol-free, Promega), dNTPs, primer/probe mix, and 1X Lyophilization Reagent, supplemented with 0.5X TE buffer to prevent hydrolysis of the dNTPs. Unlike the first two formulations, the PCR buffer was omitted to avoid salts and potential surfactants that could damage the reaction components. The solution was aliquoted and freeze-dried in PCR tubes, which were rehydrated with 1X PCR buffer upon use. Template DNA (1 µl) was added, prior to amplification. The formulations worked well and were stable. Consequently, this third formulation was used for longer term stability testing.

Based upon the above outcomes, tubes were prepared using the glycerol-free Taq DNA polymerase. Reaction solutions were prepared in 200 µl eight tube PCR strips. Each tube contained 19 µl of qPCR mix, aliquoted from a cocktail containing 100 µl 2X Lyophilization Reagent, 10 µl primer mix (20X concentrate), 1 µl Taq DNA polymerase (GoTaq® MDx DNA Polymerase, Glycerol-free, Promega), and 4 µl dNTPs at 25 mM each nucleotide (Denville Scientific). The reaction mixes were flash frozen by placing them into a 96 well PolarSafe™ Aluminum Cooling Block (Denville Scientific), designed for 200 µl PCR tubes, which was pre-chilled to -80°C in a laboratory freezer. The aluminum cooling block was quickly transferred to a Virtis Advantage shelf freeze-dryer, where the shelf was pre-chilled to -40°C. Strip caps were placed ajar on top of the tubes. Tubes were equilibrated to -40°C for 1 hr, followed by the application of the vacuum. Once the vacuum was equal to or lower than 200 mtorr, the shelf temperature was adjusted to -15°C for primary drying. After 4 hours, the temperature was increased to 20°C for secondary drying, which was maintained for 45 minutes. The pump was turned off, the vacuum released, and chamber opened, followed by the immediate capping of the tubes with the strip cap. The PCR strips were vacuum sealed in Mylar pouches at 4°C until use.

To test the effectiveness of both the freeze-drying and stability of the reagent, a shelf life study was conducted by running qPCR once a week for four weeks using a stock of Zea mays (corn) DNA. In addition to the lyophilized reagents, a freshly prepared lyophilization reaction mix and a reaction using the Bio-Rad Mastermix were run, both with and without corn DNA. To use the ready-to-use qPCR tubes, the cakes were rehydrated in 19 µl 1X PCR buffer (containing 5 mM MgCl2). Template DNA was prepared separately, and 1 µl was added to the tubes, followed by capping and running on the thermocycler. In all cases, negative controls had Ct values 15 to 20 cycles higher than the positive controls. Comparing the lyophilized reaction mix to the fresh reactions showed that the ready-to-use reactions had generally lower efficacy than freshly prepared reactions. Though the numbers fluctuated, there was no large amplification decrease in the freeze-dried preparations. However, the difference in Ct was significant and is worthy of additional analysis. The reactions using the Bio-Rad Supermix generated the lowest Ct values. 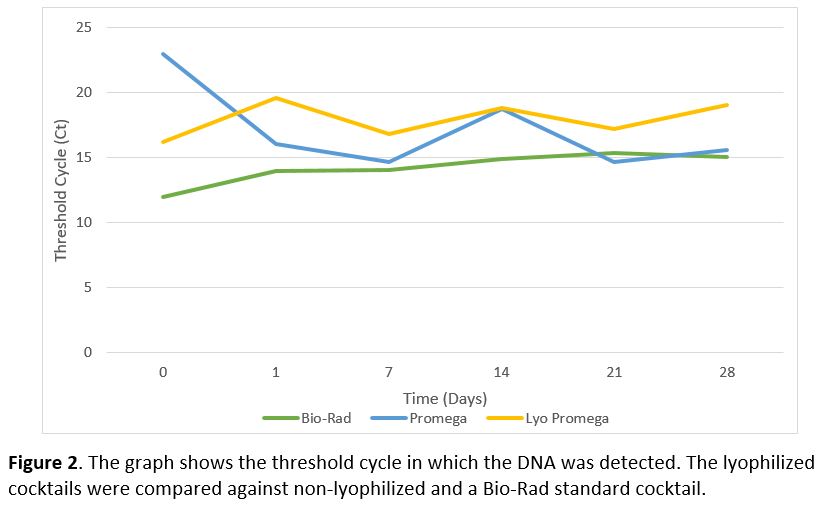 Figure 2. The graph shows the threshold cycle in which the DNA was detected. The lyophilized cocktails were compared against non-lyophilized and a Bio-Rad standard cocktail.  (Click on image to enlarge)

The four week shelf-life study shows that the reagents were stable at 4°C in vacuum sealed pouches. As the data above shows, the freeze-dried mix was less robust than fresh cocktails, but it did not lose a significant amount of activity due to freeze-drying and storing at 4°C. This method for generating a shelf-stable reaction shows promise and will be further investigated and optimized.

Assessment of Freeze Drying Variability in a 96 Well Format

In many 96 well assays, the data generated from the wells is not always evenly distributed, as is particularly obvious in cell based assays experiencing the edge effect. To test whether the freeze-drying of the plate was sensitive to potential “plate” effects, a full plate of strips was freeze-dried and amplified to measure a single concentration of corn DNA. 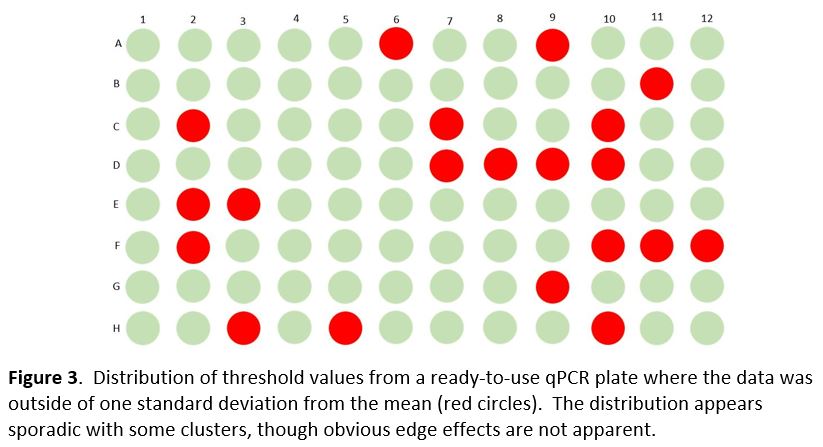 Figure 3. Distribution of threshold values from a ready-to-use qPCR plate where the data was outside of one standard deviation from the mean (red circles). The distribution appears sporadic with some clusters, though obvious edge effects are not apparent.  (Click on image to enlarge)

Figure 3 illustrates the wells (in red) that had Ct values outside of one standard deviation of the mean. Most apparent is that there is no obvious edge or corner effects, but several random and small clusters of wells with higher deviations. Whether this is significant or simply random is unknown.

Using a freeze-drying formulation incorporating our 2X Lyophilization Reagent, while avoiding glycerol, surfactants, and excessive salt, we were successfully able to freeze-dry PCR reagents in shelf-stable, ready-to-use format. The resulting mixture required only rehydration using molecular biology grade water and PCR buffer prior to adding template DNA for amplification. Reactions using the freeze-dried qPCR mixture were stable, but with slightly less activity than freshly prepared reactions. There is ample room to optimize this process by testing various Taq Polymerases for better results, for example; the only requirement for this study was that the Taq Polymerase was glycerol-free. Our future research efforts will focus on selecting components for optimizing the sensitivity of the reaction while ensuring reaction stability.