OPS Diagnostics has developed three proprietary formulations for freeze drying.  The first formulation is used to preserve microorganisms.  The second is a concentrate that is useful for preserving proteins.  The final solution is an indicator that changes color as a result of water loss, making it a tool for monitoring the freeze drying process.  These products are available for sale through distributors, and as such require a functional evaluation to determine shelf life from the time of manufacture.

These solutions have been produced in small batches since the summer of 2005.  Retained samples from those production runs have been stored at room temperature under laboratory conditions for the sole purpose of performing a real-time shelf life study.  Currently, samples that are 18 months, 10 months (for the microbial buffer), 5 months, and freshly prepared are available for comparison.

This study will compare each retained sample of lyophilization reagent in a functional assay to measure the potency of the formulation over time.  The Microbial Freeze Drying Buffer will be used to freeze dry bacteria and then assessed for its efficiency by looking at cell viability.  The Lyophilization Reagent (2X) Concentrate will be used to freeze dry an enzyme, lactate dehydrogenase, which will then be reconstituted and used in a comparative colorimetric assay.  The colorimetric Freeze Drying Indicator retains will be compared to each other using a simple visual comparison measurement.

Microbial Freeze Drying Buffer.  Escherichia coli (ATCC 35421) was cultured overnight in 25 ml of Tryptic Soy Broth (Difco 211825) at 37°C on an orbital shaker (300 rpm).  The bacterial culture (1 ml) was transferred into microfuge tubes and centrifuged at 7000 rpm for 10 min.  The supernatant was removed, leaving the bacterial pellet.  The bacteria were re-suspended in 1 ml of Microbial Freeze Drying Buffer.  In total, four different preparations of buffer were tested, which dated to August 2005, May 2006, October 2006, and March 2007, representing 18 months, 10 months, 5 months, and freshly prepared samples.  The bacteria suspended in Microbial Freeze Drying Buffer were aliquoted (200 µl) into 2 ml screw cap glass vials and freeze dried (without caps) using the following parameters:  freeze to -40°C, primary drying at -10°C for 16 hours, and secondary drying at 20°C for 2 hours.  Upon completion of the cycle, the tubes were capped with PTFE lined caps and stored in sealed plastic bags.

To test effectiveness of the buffers, the freeze dried cultures were reconstituted with 200 µl water and serially diluted in Tryptic Soy Broth.  The original culture was also serially diluted at the time of sample preparation.  For all samples, the serial dilution was accomplished by aseptically dispensing 180 µl of Tryptic Soy Broth into wells of a sterile 96 well plate, adding 20 µl of bacterial culture to wells of the first column and then serially diluting 1 to 10 through column 11.  The final column (12) served as a negative control.  The microplate was then placed at 37°C and incubated overnight.  Wells with viable bacteria appeared turbid following the incubation period and were scored as positive.

Freeze Drying Indicator.  The Freeze Drying Indicator is a pink solution that turns blue upon lyophilization.  Complete removal of water yields a blue cake while incomplete water removal may show pink streaks or crust.  The solution is composed of the Lyophilization Reagent (2X) Concentrate with an added colorimetric indicator.  To test the shelf life of the indicator solution, 500 µl was dispensed into 2 ml glass vials and freeze dried using the following cycle: freeze to -40°C, primary drying at -10°C for 16 hours, and secondary drying at 20°C for 2 hours.  Vials were capped following lyophilization using PTFE lined caps.  The vials were then qualitatively scored as blue or pink.  Freeze Drying Indicator retains from August 2005, October 2006, and March 2007 were compared, providing a comparison of 18 months, 5 months, and freshly prepared samples.

Lyophilization Reagent (2X) Concentrate.  Escherichia coli (ATCC 35421) was cultured overnight in 25 ml of Tryptic Soy Broth (Difco 211825) at 37°C on an orbital shaker (300 rpm) to produce lactate dehydrogenase (LDH) for the shelf life study.  The bacterial culture was dispensed into 5 ml tubes and centrifuged at 7000 rpm for 10 min.  The supernatant was removed and the cells were suspended in 1 ml homogenization buffer (50 mM Tris, pH 7.5, 30 mM NaCl, 2 mM EDTA).  To disrupt cells and release LDH, 500 mg of 100 µm Low Binding Zirconium Beads (OPS Diagnostics) was added to each tube which was then vortexed for 10 min.  The cultures were centrifuged and the supernatant containing LDH was transferred to new tubes.

Assessing shelf life relied on comparing the activity of the LDH preserved by freeze drying in the three retained samples of Lyophilization Reagent.  A standard colorimetric LDH assay was used which measured color change at 490 nm on a microplate reader.  A continuous assay (readings every 30 seconds for 30 minutes) was used that yields a maximum slope for each reaction.  The assay involves mixing reconstituted enzyme (50 µl), 200 mM Tris buffer, pH 8 (50 µl), lithium lactate (50 µl), and INT/PMS/NAD substrate (50 µl).  The lithium lactate is prepared by dissolving lithium lactate (Sigma L-1500) to 20 mg/ml in water.  INT/PMS/NAD is prepared by dissolving 8.6 mg NAD (Sigma N-0632) in 2.3 ml water and adding 100 µl INT stock solution (3.3 mg/100 µl DMSO - Sigma I-8377) and 100 µl PMS (0.9 mg/ 100 µl water - Sigma P-9625).  INT/PMS/NAD can be prepared ahead of time and stored at -20°C.

Microbial Freeze Drying Buffer.  The retained samples of the Microbial Freeze Drying Buffer performed equally well.  The initial sample grew at a dilution of 10-9 while all freeze dried cultures successfully grew at dilutions of 10-8.  Figure 1 summarizes the dilution at which the culture and freeze dried bacteria successfully grew.  Fresh cultures normally have a slightly higher number of viable bacteria as freeze drying does kill some cells.

To score the dilution of freeze dried bacteria, dilutions were performed in duplicate.  Growth in either one of the two wells was considered positive at that dilution as long as the previous dilution were both positive.  Figure 2 illustrates the growth of serially diluted freeze dried cells.

Figure 2.  Serial log dilution of freeze dried cultures shows comparable effectiveness of the freeze drying process.  The May 06 sample is scored as positive as one of two wells demonstrates positive growth. 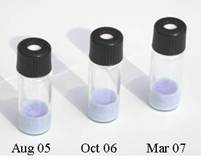 Figure 3.  Functional comparison of retained and fresh samples of Freeze Drying Indicator used in the shelf life study shows that all samples performed as designed.

The variation between the August 2005 sample and later samples is approximately 8%.  Though some variation in activity is expected, this variation could well be due to modifications in reagents used to produce batches and actual production methods.  During this period the overall production process was slightly modified to account for scale up requirements.  However, it must be stressed that shelf life was excellent with the oldest sample showing the highest activity.

The shelf life study of Microbial Freeze Drying Buffer, Freeze Drying Indicator, and Lyophilization Reagent (2X) Concentrate indicates that all solutions are stable for at least 18 months with no loss of activity.  Based on this data, it can be extrapolated that these solutions will continue to retain functionality.  It is important to note that these solutions are sterile and that shelf life stability is dependent upon sterility.