Inadequate storage methods for plant samples can significantly impact DNA quality and relative levels of plant/microbial DNA, especially for those in the field without access to proper cold chains. As a possible solution, to more accurately measure plants and their microbiome, a CTAB based buffer was tested to preserve a snapshot of plant and microbial DNA profile. Leaf samples were placed in the CTAB-based solution, which doubled as the homogenization buffer for Synergy™ Plant DNA Extraction kits. Initial testing of maize leaf tissue in the CTAB solution vs a TE buffer control stored at 37°C, followed by DNA isolation at different intervals (0-14 days); showed an increase in the threshold cycle (Ct) for the microbiome of the TE samples when compared to a maize target. Conversely, the values of the CTAB solution stored microbiome remained constant when compared to the maize target. Further tests simulating diseased field samples had an assortment of commodity plant leaves spiked with Fusarium oxysporum and Pseudomonas aeruginosa, which were then harvested, placed in the CTAB solution, analyzed by qPCR for the plant, the pathogens, and 16S rDNA isolated at collection and after 7 days stored at 25°C. The resulting qPCR of the targets showed consistent Cts for all species between sampling day and storage day 7. This simple method shows promise in preserving the genomic profiles of both plant and microbiome during field studies where conventional storage methods are not available, and transport times are long between the field and laboratory.

Post-harvesting preservation methods play a key role when downstream applications are highly sensitive to sample quality. Common effective preservation methods include limiting water activity by drying or freezing, and by using preservatives to control microbial and enzymatic activities. Cold storage of plant samples collected in the field is often impractical, thus storing samples with silica desiccant or in buffers containing preservatives, such as sodium azide, is common. When analyzing plant samples for pathogens and/or microbiome, preserving nucleic acids of viruses and microorganisms relative to the plant genome is also critical. Though silica desiccant will dry plant samples, the delay between sampling and effective removal of water may result in changes to the microbial population. Likewise, samples stored in preservative solutions may result in a leaching of nucleic acids from the plant and associated microbes, which will artificially change the relative amounts of microbial and plant nucleic acids that can be harvested. In this study we compare the storage of plant leaves using silica desiccant, a CTAB/azide buffer, and CTAB homogenization buffer over a two-week period in preparation of DNA extraction for qPCR analysis of plant and the microbiome. We further simulate the detection and comparison of Fusarium and Pseudomonas pathogens from freshly harvest plant leaves and samples extracted after one week. 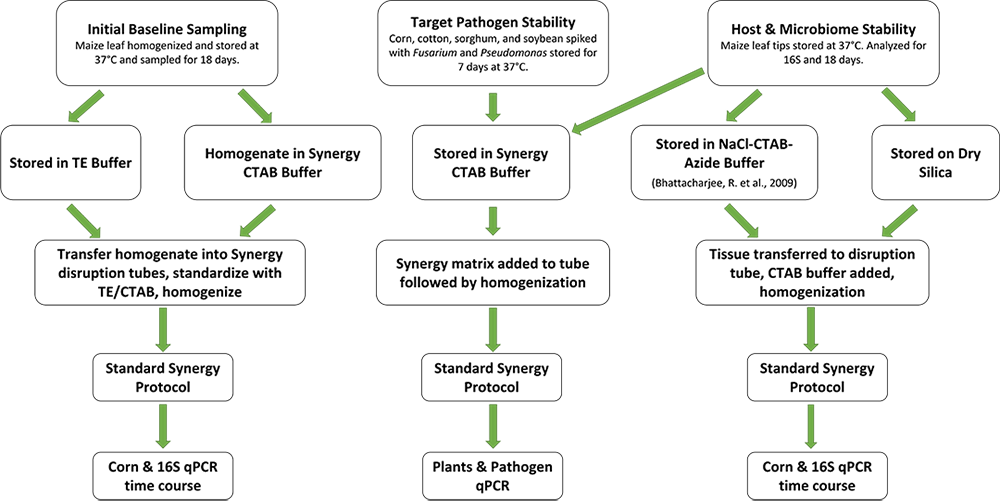 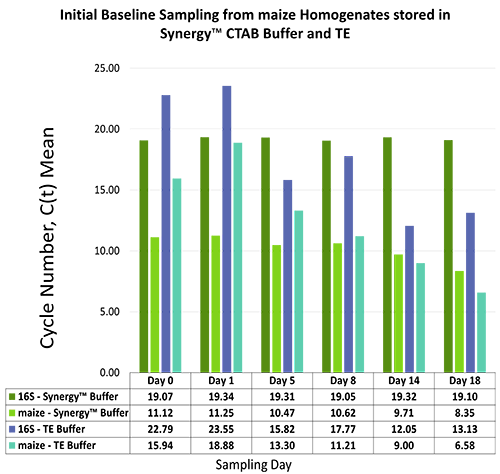 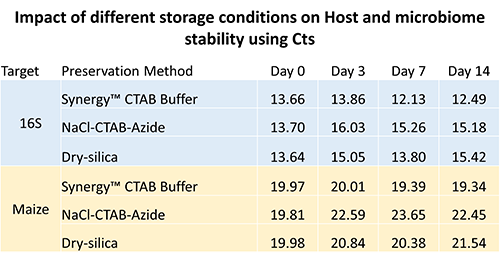 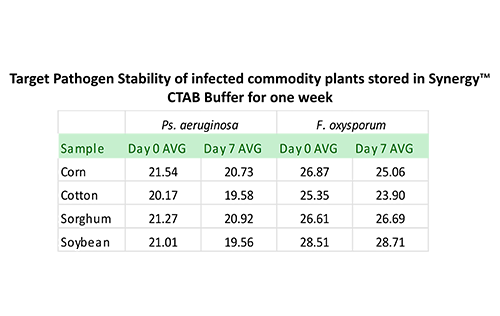 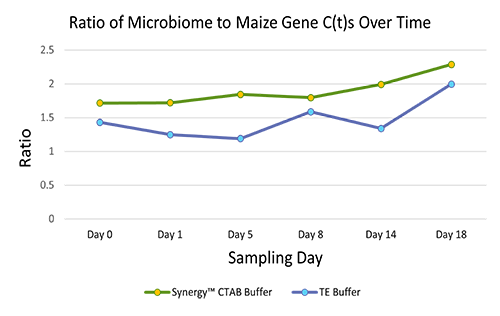 Leaf homogenized in CTAB extraction buffer protects both the maize gene and 16S rDNA over an 18-day period as compared to leaf homogenized in TE buffer. qPCR analysis showed there is considerable variation in target DNA concentration in both the NaCl-CTAB-azide preserved and dried samples as compared to leaf stored in Synergy™ Homogenization Buffer. Differences in 2-3 Cts can represent up to 90% loss of target DNA. Though DNA loss from the azide solution was predictable, the loss of significant amounts of DNA from dried samples is surprising. With the dried samples, it is unknown whether DNA was degraded or became fixed/adsorbed to insoluble components generated during homogenization. This study suggests simple storage of plant leaf samples in a CTAB-based homogenization buffer, coupled with a direct extraction strategy, effectively maintains DNA quality for PCR analysis, which provides a snapshot of the specimen when sampled.